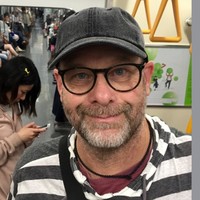 Warwick Field ACS is an Australian-based, Australian Cinematographers Society Accredited cinematographer, camera operator and colorist. As a DP, his body of work includes Feature Films, TV Series, TVC’s, Music Video, Documentary and high-end corporate work. His specialties include narrative cinematography and visual storytelling and uses composition and camera movement to its full potential. Warwick operates both geared heads (wheels) and fluid heads. He is also an expert remote head operator, hand-held operator, gimbal operator and aerial cinematographer. Warwick’s passion for cinematography continues away from the camera as a colorist, where he brings his eye and attention to detail to the grade to ensure the images reach their true potential. He works on both his own pictures and those of other DP’s.

Born to a European mother and Australian father, both artists, Warwick Field’s distinctive aesthetic and significant expertise has seen him shoot projects all around the world.

Warwick became fascinated with the power of the image at a young age. This early interest led him on a path to stills photography motivated by the works of such photographers as the black and white landscaper Ansel Adams and the portrait-genius Henri Cartier-Bresson. But Warwick was soon drawn in by the magnetism of the moving image with all of its wonder and potential.

With vast experience in all film and digital formats including IMAX, Warwick is passionate about incorporating the best of emerging technologies while holding true to the fundamentals of cinema. Art and technique; both and always.

Warwick is known as a ‘hands-on’ cinematographer who prefers to operate the A camera on the majority of his work. Warwick’s enthusiasm and dedication to a project is thorough and encompassing, irrespective of the scale or type of production. He prides himself on strong collaborative skills, deep professionalism, and a tireless work ethic and is driven by a passion for the creation of dramatic, provocative and memorable images that realize the story while delivering an immersive, emotional audience experience.

Warwick’s work has been profiled in several industry publications. He is often found on panels and forums discussing his work and the art and craft of cinematography.

For five years, Warwick was President of the Australian Cinematographers Society (Victoria) and continues in roles of the National branch of the Society. He is well known for his passion of bringing the art and technique of cinematography to the ACS Membership and local film industry by way of Screenings and Q&A’s and technical events, forums, panels and lectures, often aimed at emerging students of cinematography.​